The ATF54143 is a PHEMT device from Agilent technologies that can provide low noise figures combined with high signal handling characteristics.

The prototype for this amplifier was originally designed for 70cm and was used on the 2004  '3B9C' Dx-pedition to Rodriguez Island for satellite and EME.  It had a noise figure of 0.49dB with an associated gain of 20dB.

The intended application for this new version is  reception of U band satellite signals where the receiver may have  to perform in the presence of strong uplinks in the 2m band.

The circuit includes active bias and has the ability to receive DC  power via the center conductor of the coaxial cable.
Power requirement is 7 to 13.8V at 35mA.  A surface mount 5V regulator is included on the PCB.

The PCB is a 31mil thick FR4 with nearly 80 plated through 0.7mm holes. It has shorting straps on the 2 source connections which allow a small amount of source inductance to be added to the design. This may allow the PCB to be used for the 2m band as a small amount of additional source inductance would increase stability
Overall size is 55.5mm x 32mm. This fits a standard waterproof diecast box available here in the UK.
The board can also be cut down to 45x 32mm for use with a different enclosure.
An extra line of plated through holes has been included to maintain good continuity when the board is cut to 45mm.
The PCB is shown below with the many vias omitted. For operation above 800MHz the best performance is achieved with the board fitted into an enclosure where it can be soldered around the edges on both sides of the board.

The exact circuit implemented on the board can be any of several published designs. I have used a circuit similar to that described in the ATF54143 application note but with the inductor and capacitor values scaled for 70cm and  a damping resistor close to the drain.

Gain and noise figure plotted against frequency from 145 to 1500MHz

Close up view of noise figure against frequency

Below is the PCB made from 31mil (0.8mm) FR4 material. The board has over 70 plated through holes to ensure good grounding.

Since measuring the amplifier from 435 to 1500MHz I have decided that ability to add source inductance, which is printed on the PCB, has no real benefit. However, the board can be used for lower frequencies and on 145MHz the use of the source inductance would be necessary as the device has very high gain on that band. 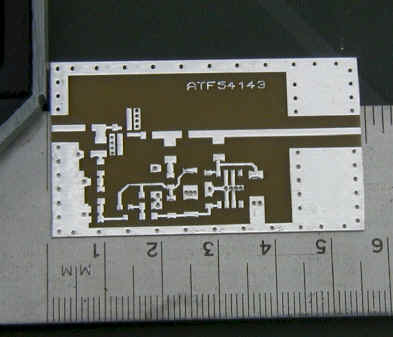 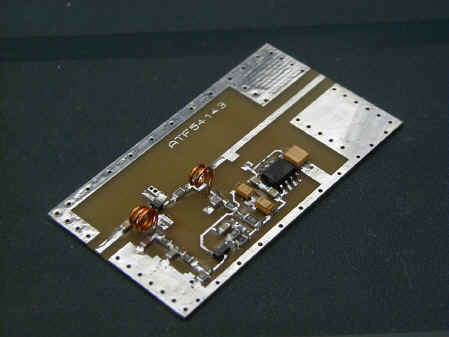 Above: Original PCB with isolated sourceinductors and grounding strips. 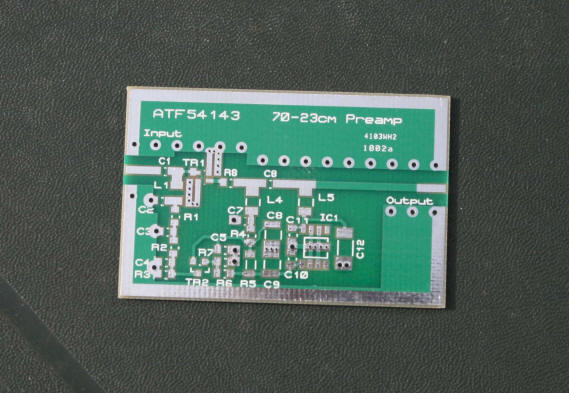 A kit of parts  including the PCB and all the components is available for £20 in the UK  25 Euros in Europe or $30 dollars in the USA.  Standard shipping by recorded delivery in the UK or standard airmail for Europe / USA is included in the cost.
Note that the enclosure and connectors (SMA or N-type recommended) are not included. 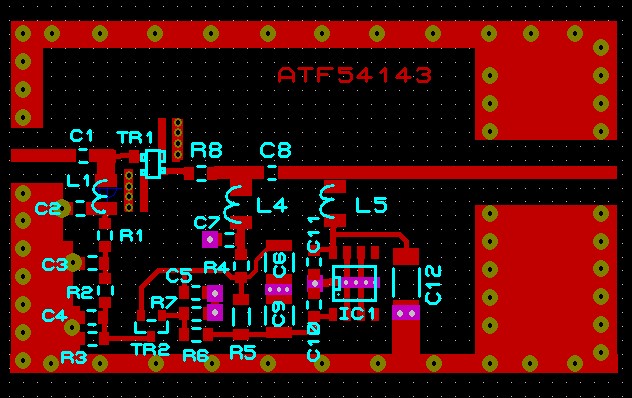 Address on kits page or QRZ.com 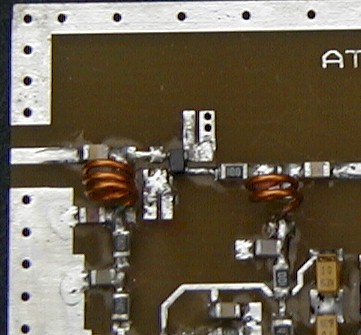 Hints from and for constructors:

1) The Tantalum capacitors have their positive terminal marked with a black line.
2) The correct orientation for the regulator can be identified by either:
a) Pin 1 marked with a dot molded into the plastic
b) The edge along Pin 1 and 8 marked with a 'bar'
c) The black plastic body has a chamfered edge along pins 1 to 4 while the body along pins 5 - 8 has a 90 degree angle.
3) When the board is completed, test and check DC voltages. When mounting in a box DO NOT FLEX THE PCB.  If you do then use the DC voltages to     find the cracked SMD components !
4) The larger pin on the PHEMT is a source connection which is on the same side of the device as the drain. See overlay above for correct placement.

1) "The preamplifier arrived safely here and I already built it, succesfully I must say. Measured gain at 435 is around 20 dB! I am very satisfied with it. Thank you! "
73
Dragos    ( YO3GCF - Romania)